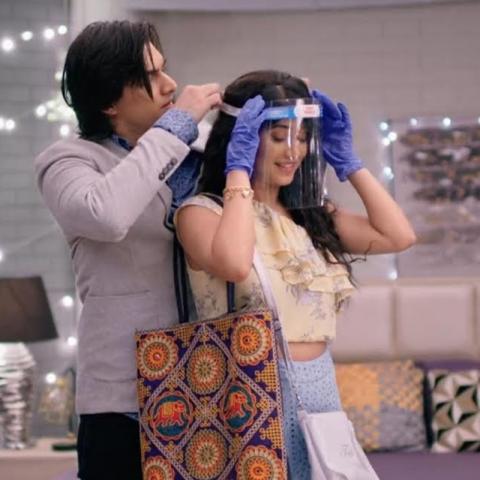 MUMBAI: Turn on your TV sets and you will see that most shows have resumed shooting. But what’s different now? Unlike before, leading characters in shows are seen wearing masks, face shields, gloves and using sanitisers. As a responsible community, GEC shows are also passing on information to viewers about Covid2019 precautions.

While speaking to Indiantelevision.com, TV producers shared because the shows are watched by millions of people, channels had requested them to include safety measures being promoted within shows.

Shoonya Square Productions founder Ved Raj, who is the maker of the show Guddan Tumse Na Ho Payega, highlights that the production house will continue to have episodes where safety protocols will be showcased. However, it will not be so frequent and informative but will reflect in the story. He also points out that the studio will not be shooting from the pandemic point of view, but will try to incorporate the current situation in their stories.

He said, “From the Covid2019 lens we are showing characters wearing masks and gloves when they are going outside their homes. They are sanitising their hands after entering the house. But the plotline of the story remains the same.”

However, upcoming episode scripts that were written before the pandemic had to be re-written considering the Covid2019 situation. In this show’s case, the protagonist will not give birth at the hospital but will do so at home. The production house can’t shoot in a different studio with more junior artists.

Raj also shares, “Earlier our shows included a lot of party scenes and festivals but now I am avoiding that. It is challenging but still, it is better than nothing.”

A video clip from Star Plus’ popular show Yeh Rishta Kya Kehlata Hai is already going viral on social media where the main characters, Shivangi Joshi and Alka Kaushal, are interacting while wearing masks. In the same Mohsin Khan was seen asking Shivangi Joshi to use the sanitiser before helping her wear gloves and face shield.

Is this what Star Plus are doing nowadays pic.twitter.com/l67FcWR5wm

#Kaira is giving us #RelationshipGoals with this new style of romance in lockdown!
Watch #YehRishtaKyaKehlataHai, Mon-Sat at 9.30pm on StarPlus and Disney+ Hotstar: https://t.co/GtWfZuGNqd@shivangijoshi10 @momo_mohsin pic.twitter.com/DtlNMWhAmK

Full House Media Production director Sonali Jaffer, who is the producer of the show Tujhse Hai Raabta, thinks that it is the responsibility of the channel and the production houses to showcase the importance of taking precautions. “We are doing this positive messaging through our shows because it is the reality. Until and unless the government tells us to stop wearing masks, we will continue to show safety protocols in our episodes,” she says.

Sonali adds that even when the pandemic is over, the studio will incorporate positive things that had happened during this timeframe in their shows such as the people who bravely fought with the disease, donated their plasma to help other Covid2019 patients etc.

As far as challenges are concerned while shooting the episode, Sonali points out that no producer or a writer likes to do a cheat shot. But now, no extra scenes are filmed, important conversations are happening from the point of view of one character only. Double shots of different locations are avoided.

Shakti Astitva Ke Ehsaas Ki writer Sharad Tripathi says that to a certain extent the makers of the show will introduce pandemic scenes and protocol measures in their show. He also adds that they will be using different footages and cuts of actors wearing masks and gloves wherever possible to create awareness.

“There is a mass following of the show, so I think it is important for us to tell people about what should be done. In the coming days also, what the government will say, we will try to portray it through our scenes and dialogues,” he further added.

Ekta Kapoor’s show Yeh Hai Chahatein shows the characters discussing how house-helps should go on leaves. Then the entire family was seen contributing to the household chores. In one of the latest episodes, the main lead played by Aishwarya Sakhuja was seen talking about online classes, and how it would help students to continue their studies with the help of technology.

SAB TV’s show Tera Kya Hoga Alia started the episode with showing Alia, played by Anusha Arora, and Rabiya, played by Namrata Pathak, on an early morning jog. The two were seen talking about the importance of maintaining social distancing and wearing a mask when outdoors.

Amber Sharma has finally realized his feelings for Guneet Sikka, but is it too late now? Is there a new twist in #AmNeet's love story? Find out in the new episodes of #MereDadKiDulhan starting from 20th July Mon-Fri at 10 PM. #RestartSafely @ATatrari #ShwetaTiwari #VarunBadola pic.twitter.com/gMVm19Qy0F

Since all producers and writers are facing similar challenges, audiences will get to see reality reflected in all the shows.