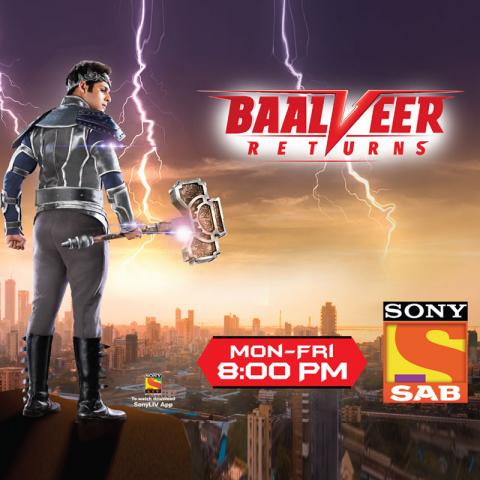 MUMBAI: Sony SAB’s fantasy drama ‘Baalveer’ which has captured the imagination of audiences across the country with its fascinating storyline, has also earned the distinction of being named as the most searched Indian television show across the world according to Google’s annual trends report ‘Year in Search’ for 2019.

The report ‘Year in Search’ which was revealed recently by Google comprises of data of the most searched topics globally in 2019. Specifically, Google looked at the biggest trends or search terms that saw the largest spikes in traffic over a sustained period in 2019. Baalveer was the only Indian television show from a Hindi general entertainment channel to be featured in the top searches for television shows across the world.

Set against the backdrop of the two mystical worlds of Veer Lok and Kaal Lok, Baalveer Returns is India’s most loved fantasy drama show on Indian television. Sony SAB, one of the leading Hindi General Entertainment Channels in India, launched the new season for the show titled ‘Baalveer Returns’ featuring Dev Joshi, Pavitra Punia and Sharmilee Raaj amongst others in September which led to this phenomenal spike in search activity on Google. Baalveer Returns features state-of-art sets, delightful cutting edge VFX and a brand-new script with exciting new characters. Interestingly, Baalveer Returns also emerged as the ‘Breakout’ search term on Google ‘Year in search’ for 2019.

For viewers of Sony SAB, Baalveer is not just a show; it’s a legend – a landmark show on Indian television where the first season of the show had concluded in 2016 after a thrilling journey that continued for over 1000 episodes. Such was the craze for Baalveer that even after four years since the end of the first season, the show was still one of the most viewed shows on SonyLIV, Sony Pictures Network’s online streaming platform. Owing to the demand and the interest from the fans for a new season Sony SAB decided to bring back the magic of Baalveer to the TV screens in a grand new avatar this year.

Sony SAB, PAL and Sony MAX movie cluster business head Neeraj Vyas said, “Being the only Indian GEC show in the top 10 most searched TV shows on Google globally is a tremendous achievement and we would like to thank all our fans for their love and support which has seen Baalveer and all our shows scaling new heights in popularity every year along with all the cast and crew who work relentlessly to make Baalveer Returns such a grand success. We have always aimed to be the happiness enablers in people’s life and hence all our offerings have always been light-heart values driven content that is loved by all the members of family and one of the key points that differentiates us from our competition is our ability to create characters that click with the audience – the success of Baalveer Returns is a true testament to that.”