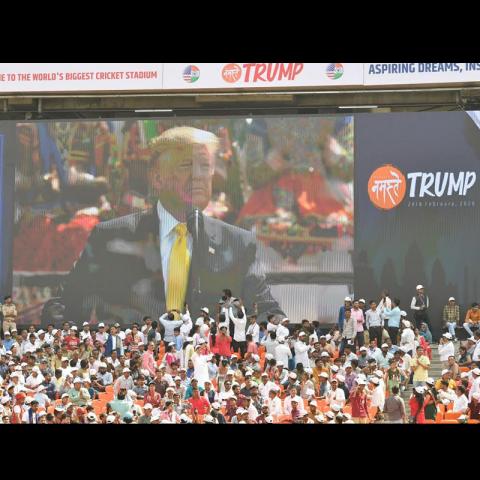 MUMBAI: From Bollywood to cricket and terrorism to defence, US president Donald Trump made an attempt to woo Indians and send a positive message back home to the Indian-Americans in his 26-minute-long speech during an event ‘Namaste Trump’.

The event, Namaste Trump, is considered to be strategically important to Trump as the US presidential elections are slated later this year. Seeking a second term in office, he has been trying to create positive vibes and raise his brand value across the globe which eventually could have an impact back home. In the US, as many as 40 lakh people Indian-Americans are crucial, capable of swaying votes in his favour.

Media pundits and experts are of the opinion that Trump’s India visit is a well-calculated marketing initiative.

Havas Media chief executive officer Anita Nayyar said: “Indian-Americans are contributing a lot to the US economy and could be the potential campaign fundraisers.”

Nayyar believes it was a well-planned marketing gambit of Team Trump to come to India a few months ahead of the presidential elections to woo the Indians and the Indo-Americans back home. It may be recalled that in 2018, the US president turned down India’s request to be a chief guest for the Republic Day event.

She adds: “Trump talked about India very well in his address. He talked about Indian festivals and the country’s cultural diversity. He also touched upon topics such as movies, cricket - all those good aspects where India is progressing.”

Trump quite often has a habit of making loose comments, which can have repercussions, at domestic and international levels. “I was quite surprised that Trump remembered and touched upon all the areas where the Modi government has made progress,” explains Nayyar.

Literally playing to the gallery and earning the applause of the cheering crowd at Motera stadium, the US president eulogised Bollywood and mentioned Dilwale Dulhania Le Jayenge and Sholay. He very well struck a chord with the audience by talking about cricket, which is almost like a religion to the masses. He also mentioned the cricket legend Sachin Tendulkar and the Team India skipper Virat Kohli in his speech.

Despite facing problems in pronunciation, Trump also praised the work of Swami Vivekananda and Sardar Patel in his speech. He also lauded India’s effort to reach the moon’s southern pole.

The president’s popularity in India has soared to 56 per cent from 14 per cent since his candidacy in 2016, a Pew Research poll said in a report. Nayyar says: “The sole credit for the increase in confidence within Indians for Trump goes to Modi as their bonhomie has been quite visible for the last few years.”

The president, all along with his speech, kept praising India, Indians and prime minister Modi and his government’s work. “India will hold a very special place in our hearts,” he said. “America loves India, America respects India and America will always be a loyal and faithful friend to Indian people.”

Nayyar also said that it was expected that Trump would speak on the common problem shared by both the two nations: terrorism. Trump in his speech said: “India and the US are committed to fighting terrorists and their ideology; that is why my government is working with Pakistan to crack down on terror groups.”

Moreover, on defence strategy, he also announced an over $3 billion military deal between the two nations that would be signed on Tuesday. “The Indian armed forces will get the absolute finest state-of-the-art military helicopters and other equipment through this deal,” he said.

Echoing Nayyar’s views, Dentsu Aegis Network’s chief executive officer Anand Bhadkamkar says: “Trump is a great marketer and he understands the pulse exactly where to reach out. He definitely will make use of every  opportunity he comes across.”

He believes that the recent visit to India could be termed as Trump’s approach to woo Indians in India as well as in America. “Indian-Americans are quite large in the US and this visit cannot only be seen as the upcoming US election agenda, but an enhancement of bilateral and trade relations between India and the US.”

“Trump is a quite sharp businessman and great politician, which he has proved in the last few years. Trump as a brand has great value and people do respect him for what he’s creating. He has maintained what he was before and he’s very conscious and aware of the same,” says Bhadkamkar.

The Namaste Trump event is a return gift to the US president. “Five months ago, the United States welcomed your great Prime Minister at a giant football stadium in Texas and today India welcomes us at the world's largest cricket stadium right here in Ahmedabad,” Trump said in his address.