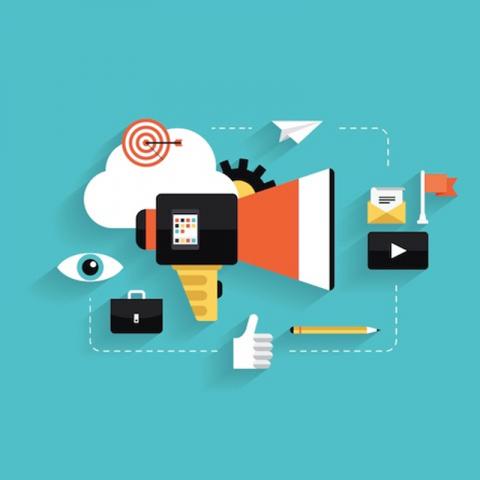 MUMBAI: Despite headwinds, India’s importance in global advertising increased in 2019. The forecasted 2020 growth rate of 11 per cent for India is more than twice the average rate of the top ten countries, according to FICCI-EY 2020 report. As per GroupM, India became the eighth largest ad market in the world in 2019, up from tenth largest in 2018. It contributed the third most to incremental ad spends in 2019 after the USA and the UK.

Dentsu Aegis Network CEO APAC and chairman India Ashish Bhasin said, “India will be the fastest growing major market in the advertising world over the next five to 10 years. We are in a unique situation in India where all media will grow, albeit at very different rates, over the next five years, with digital leading the charge and print continuing to grow relatively slow. The pace of change, the omnipresence of mobile and the preponderance of voice, video and vernacular will dominate the Indian advertising scenario for the next five years.”

While overall advertising spends grew, there was a marked slowdown during the latter half of 2019 due to fears of economic slowdown. With advertising and events reaching Rs 878 billion in 2019, it was a considerably tough year for traditional advertising.  Growth rate of traditional advertising (television, print, OOH, radio) fell because of print and radio, where both saw over five per cent degrowth for the first time.

However, digital saw a growth of 24 per cent, the highest among all. 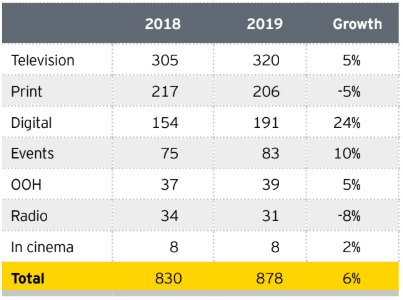 The dip in the ad spend in 2019 can largely be attributed to the New Tariff Order and resultant revision in ad rates, coupled with a sluggish auto-sector and a slowing economy in the second half of the year.

Although marketers’ future outlook seems more optimistic, 39 per cent of the respondents feel positive about the economy. They believe that the ad spends will grow in 2020. This appears to be corroborated by initial signs witnessed in January 2020, which indicated an expansion in both manufacturing and services sectors, with services activity hitting a seven-year high and manufacturing PMI at an eight-year high.

However, supply chain disruptions due to the novel coronavirus could again dampen ad spends.

Havas Media CEO India and South East Asia Anita Nayyar says, “More than the NTO or any other factor, it is COVID-19 that is impacting the ad spends. There is a lot of caution on ad spends in the market. The current fiasco in the banking sector is just adding fuel to fire. Advertisers are waiting and only undertaking crucial spends.”

Out of the total marketers surveyed 82 per cent are expected to grow spends on digital by over 10 per cent during the next two years. 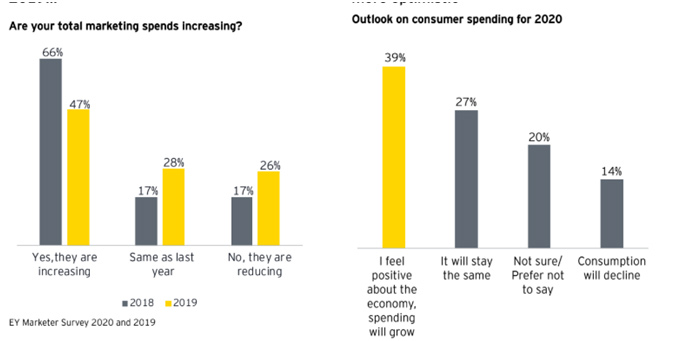 The top priorities for Indian marketers’ in 2020 include direct-to-consumer (D2C) market. More than one in five respondents in the US plans to make 40 per cent or more of their purchases from D2C companies.

As per the survey, India is not far behind D2C interaction being a leading priority, right after improved RoI on spends. According to an estimation, 100 D2C brands have already launched in India.

Amidst the growth witnessed in the digital ad industry, continuous incidents of fraud are a matter of concern. However, the worry of ad fraud seems to have reduced in 2019 with 30 percent as compared to 34 per cent in 2018. The report states that despite the risk of ad fraud in digital industry 56 percent of the respondents in 2019 increased their spending as compared to from 45 per cent in 2018.

The FICCI EY report suggests that the budget for influencer marketing in India is going to increase. Over 72 per cent of Indian firms are planning to increase their spending on social media influencers, big and small, in 2020. However, the report mentions that it hasn’t taken into account the impact of Covid-19 so the estimate is pre-Covid era.

Digital platform has opened new avenues for content creators. Consumers will look for content and ads that take up less time. According to a recent survey by Vuclip, 85 per cent viewers preferred short-form video content (i.e., short films/ videos of 10 minutes) on smartphones. The report predicts that the demand for short-form content will increase several times in 2020.