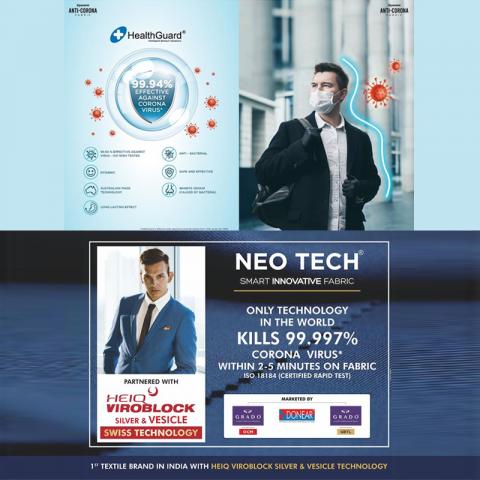 NEW DELHI: The race to create Covid2019-protective products is on. Indian fashion retail brands such as Donear, Arvind, and Siyarams have launched anti- Covid2019 fabric products in the market, claiming that it kills the deadly virus when comes in contact with the product.

Textile manufacturer RSWM Ltd has announced its latest innovation with the launch of the anti-viral fabric range ‘ViroSecure.’ The new range has been launched through a strategic technology partnership with HeiQ that lends its antiviral Viroblock technology to formulate a protective coating on the fabric to offer 99.99 per cent protection against SARS-CoV-2 in just 30 minutes. With ViroSecure, RSWM is targeting 20 per cent of sales in FY 2020-21.

Mayur Suiting and LNJ Denim CEO and business head Suketu Shah says, “As the world reels under COVID2019 impact, we, as a company have the responsibility towards our consumers and are committed to equipping them with the resources to adapt to this new normal. There is a significant uptake in the demand for the anti-viral fabric technology and with this; we are targeting 20 per cent of the sales from the ViroSecure fabric in this fiscal.”

Siyaram’s has also launched its anti-corona range of fabric tested by the WHO (World Health Organisation) approved labs to fight against the spread of the pandemic. The brand claims that the anti-corona fabric provides a 24/7 silent sentinel protection from the deadly virus and is developed in association with HealthGuard, and guarantees 99.94 per cent effectiveness against the virus.

As revenues dry up, marketers are finding novel ways to push up sales. Scenario Consulting CEO Rajesh Lalwani says, “Unless backed with unambiguous medical research any health benefit claims by brands are to be taken with a pinch of salt but to do this around an unprecedented, global pandemic like Covid2019 appears highly irresponsible. We don’t know enough about the virus itself yet and to claim that we have found fabrics that won’t let Covid2019 survive seems suspect at best and frivolous at worst. I am not sure if customers are likely to be fooled so easily and would be surprised if take these messages on face value.”

However, people have also trolled the brands asking for the evidence which led the Advertising Standards Council of India (ASCI) to enter into the scene. The council has raised objections about telecasting such ads on social media platforms.

ASCI wrote on Twitter, "Dear advertiser, do not make any claims implying benefits that are not substantiated. Avoid misleading claims such as products that can mitigate or prevent from COVID2019 virus."

Dear advertiser Do not make any claims implying benefits that are not substantiated. Avoid misleading claim such as products can mitigate, prevent, protect from #COVID19 . #anticorona https://t.co/m9c9trm5an

Donear Group claims that it has collaborated with ZODIAC and has supplied a significant volume of the fabric treated with the unique HEIQ Viroblock technology that has tested successfully against the virus that causes COVID2019. ASCI has asked Zodiac to prove its facts or withdraw the ads.

TRA Research CEO N Chandramouli explains, “It is natural for a product to capitalise on the current demand and come up with products that suit the customer’s needs. However, when it comes to making claims, brands must be backed by scientific evidence or else unsuspecting consumers may end up buying products that are non-efficacious in their immunity or Covid2019 protection properties. ASCI has done the correct thing by taking action on such unsupported ad claims.”

Samsika Marketing Consultants founder, chairman and MD Jagdeep Kapoor opines that fabric brands promoting special products during these troubled times are following a relevant emerging need strategy. “This is a protective opportunity for consumers and retailers and a timely business opportunity for brands. The most critical element in this brand strategy will be credible efficacy.”

Last month, Patanjali had a massive launch for its Covid2019 cure but later took a U-turn on the claim. This created a massive furore for misleading people.

Chandramouli asserts that most often, the time lag between the claim made by the brand and the action taken against the ad is enough to give momentum to the brand’s Covid2019-related product. “Even if they change their claim afterwards, as did Patanjali, the original residual message of the brand stays in the consumers’ minds. Rather than impact credibility, some brands cleverly use this time-lag to their advantage.”

According to Lalwani, brands get away with cheap penalties but manage to get eyeballs in the interim. “Typically, top tier brands do this but brands that cater to masses tend to try such gimmicks and get away most time. People have short memories in today’s times unless the damage suffered by such claims not serious,” he adds.

In the last few months, at least four textile brands have come out with such kinds of technology-infused fabrics that claim it kills the virus shortly after it lands on the surface. As buyers are highly cautious these days and look for protection in everything, it has created a new opportunity for brands to come out with new products. However, it will be interesting to observe how effectively these brands will advertise for this new range.