Sunjoy Waddhwa on the making of 'Your Honor' 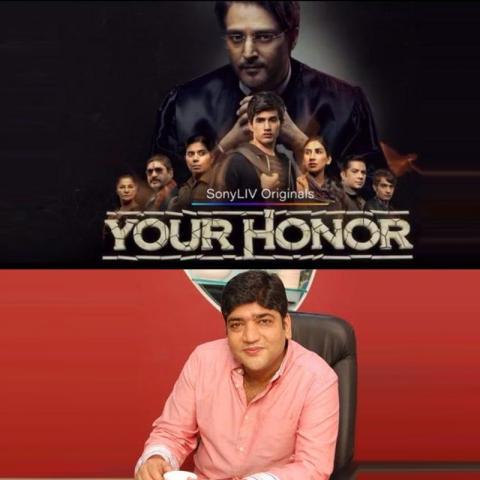 MUMBAI: Sony LIV’s latest drama-thriller, Your Honor produced for Applause Entertainment by Sphereorigins, is all set to release. In a special interaction with indiantelevision.com, Sphereorigins founder Sunjoy Waddhwa shed light on the making of the series.

The original Israeli series was created by Ron Ninio and Shlomo Mashiach and distributed by Yes Studios. The Indian adaptation is helmed by Shool fame, E Niwas.

The series is headlined in India by popular Bollywood actor Jimmy Sheirgill. The makers decided to cast Sheirgill because they wanted a face who can look more relatable to the audiences, who looks like a family man and not just a judge.

The series was shot in 2019. It took 65 days to shoot the entire series, but seven months went into research, followed by four to five recce of the location. While in reality most of the mafias were based out of North India and Mumbai, Bihar and Uttar Pradesh are usually shown as the crime capital. Hence, Waddhwa decided to take a different route and chose the backdrop of Ludhiana, Amritsar, Chandigarh and Mumbai believing it will give a different tone, texture and colour to the series. Around 60 to 70 per cent of the series was shot in Punjab. More than 125 people were involved in creating this drama thriller.

Waddhwa says, “A lot of effort went into the pre-production and designing the look and character of actors, giving authentic touch in terms of language and costume. The director, writer, production designer, they all worked collectively to give the show a more rustic feel.”

In the series, Bishan Khosla (Jimmy Sheirgill), is a reputed judge whose teenage son Abeer (Pulkit Makol) is involved in a hit and run case. The victim of the accident is the son of a gangster. So, a lot of time went into the legalities. Waddhwa sought help from advocates and legal advisers to understand the details.

He mentions, “My takeaway from this has been that the importance of having the script in hand and working properly as per the script and doing good research makes life easier.”

As the shooting took place in the months of December and January, it was extremely cold. Apart from that, technicians and technical crew and fight master contributed to make it a scaled up version of television. As it is not a VFX-heavy series, the makers relied more on shoot material.

“The entire shot taking and story thought process is very different as compared to a normal series. It is more like an extended film rather than a series. Most importantly, there was no set of rules, that it has to be made like an OTT show,” he further adds.

When asked about dealing with comparison to the US adaption, Waddhwa quips, “For a Hindi-speaking audience it is a completely different show. Because this is in the dynamics of our situation. What value you add to the adaptation makes all the difference.”

The original rights of the series belong to Applause Entertainment. Waddhwa also hints at making the sequel of the series after gauging audiences’ response.