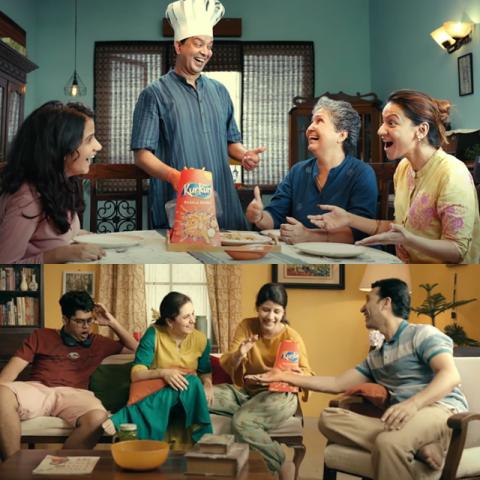 NEW DELHI: To express gratitude towards the millions of Indian families for their continued support towards each other during these challenging times, Kurkure launched a special campaign. The campaign brings to life a special thank you to the Indian families for always being supportive, entertaining, and adding ‘masaledaar fun’ to each other’s lives in their own ‘atpata’ and ‘chatpata’ ways.

Through its long journey in India, Kurkure has always been an integral part of Indian families and their daily moments filled with ‘quirky masti’. The new campaign is based on three relevant insights. The cultural insight of how India has been known for its joint family - centric setup; the social insight which recognizes the deepened bond, uptick in family time and increased connect between family members during these challenging times as more and more people have moved back home; and the consumer insight which identifies people's need to express themselves in fun and quirky ways.

PepsiCo India senior director and category head – foods Dilen Gandhi said, “As individuals, thanking our immediate families may not always come naturally to us.  While we may convey our gratitude to them through little actions, it is putting this deep emotion into words which is the real challenge. Through Kurkure’s new campaign, we aim to offer our fans and consumers across India with a fun way to say ‘thank you’ to their loved ones. This quirky tribute matches perfectly with the ‘atpata’ and ‘chatpata’ characteristics of Indian families - making this ode truly distinct in today’s scenario.”

He further added, “While the trend earlier was about moving out on your own, the reality now has once again cherished the role played by family as a social institution and familial bonding has become a privilege. Our attempt through this campaign is to celebrate that.”

The special film unveiled by the brand captures the nuances of the relationship that all family members share with each other and celebrates how they have kept one another upbeat and entertained even during these times. The peppy track takes the audience through relatable, fun-filled family moments from the homes of Indian families, such as fighting over the remote control and enjoying a special meal.  Shot in a unique stop-motion format, the film highlights that with family by one’s side, even these difficult times have been nothing short of a joyride.

Kurkure brand ambassador Akshay Kumar said, “In these trying times, we came closer to our families and became each other's source of strength, happiness and humour. Kurkure, which has a long journey of celebrating fun-filled family moments, captures this heartfelt bond and the idea of being each other's support through a special masaledaar tribute to the Indian families. I hope everyone enjoys this chatpata ode and is inspired to find fun ways of thanking their own families”.

PepsiCo Foods, India WPP lead - Ritu Nakra said, “Kurkure has always had Indian families as the "Hero" of our brand communication. In light of current events, our families have become more important than ever, acting as our support systems and making these tough times somewhat bearable. This ode to Indian families was our way of recognising and celebrating our families that have been there for us through tough times. Done in a very quintessential Kurkure manner, with loads of quirk and humour.”

The launch of the film is first in the line of many digital activations that the brand has in the pipeline for the coming few weeks. The latest campaign is being brought to life through a robust 360-degree surround plan across multiple platforms.