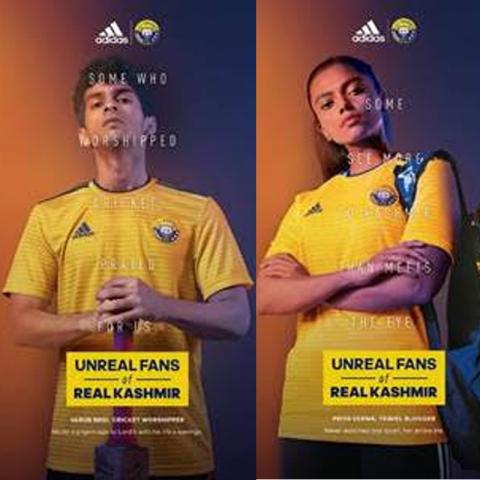 MUMBAI: Inspired by the support that Kashmir Football Club gets from its rivals’ fans, global sportswear giant adidas and Real Kashmir FC together unveiled the new design of the club’s 2019-2020 home jersey. They have dedicating it to fans of the club. The new colourways are an ode to the Unreal Fans of Real Kashmir who have made it the most loved clubs across the country

RKFC, supported by adidas, have also launched a campaign to celebrate the new season adidas jersey and dedicated it to the “UNREAL FANS OF REAL KASHMIR”. The new season campaign captures the essence of change and a new phenomenon in Indian footballing history that Indian football has witnessed during the 2018-19 I-League season with Real Kashmir FC.

The campaign rides on the insight, rather a unique trend, where fans of opponent clubs started cheering for Real Kashmir FC, as it became the second favourite club of opponent fans on social media. Fans from across India joined in conversations both on-ground and on social media to lead the voice of positivity. As RKFC travelled across the country, often, the club received standing ovations at away games from opponent fans, who did not switch loyalties but rather supported both clubs - a trend not seen before in football fanfare.

The campaign takes a leap and showcases the faith that the fans showed towards Real Kashmir favourite club, as it acquires UNREAL fans from other sports, to fans that did not follow any sport in their lives, to anyone or everyone who has followed the RKFC journey till now and seen Real Kashmir through the lens of football.

adidas India senior marketing director Manish Sapra commented, “Our journey with Real Kashmir has been unimaginable, unthinkable and unbelievable. Gets summarized in just one word ‘Unreal’. This campaign is dedicated to the Unreal Fans of Real Kashmir who may support other clubs but hold a soft corner for the snow leopards.”

Real Kashmir FC owner Sandeep Chattoo said, “This is such a cool campaign to celebrate all the new fans who have started supporting us in our journey. When we saw the campaign for the first time, we absolutely fell in love with it. It beautifully brings together the various sentiments of numerous fans across the country.”

The new season jersey has been carefully crafted, “Create. Believe. Inspire” written on the neck at the back, inspiring every individual to make a difference in their game, life and world. This season the yellow home jersey is accessible to the fans, available only in limited quantities across select adidas stores and online on starting from 21 November 2019, is built with adidas Climalite fabric and has the iconic adidas 3-Stripes on the shoulder.

Cheil India ECD Aneesh Jaisinghani said, “Last year, the first timers, Real Kashmir Football Club team, received huge success and with that we observed a never-seen before trend on social media! The die-hard fans of opponent clubs began following and cheering for RKFC.  A die-hard football fan never cheers for any other team! RKFC was gaining popularity among these die-hard fans too! And thus, was born ‘THE UNREAL FANS OF REAL KASHMIR’ campaign. This initiative intends to throw a spotlight on all those UNREAL FANS of REAL KASHMIR and encourage them to share their love for the team! We have conceptualized 3 digital films with UNREAL FANS who will share their adulation stories for RKFC with the world. We hope to boost the energy of this team and make everyone notice them through these unreal fans!”

Last season, adidas announced its partnership with Real Kashmir FC with an aim to inspire positive change by narrating the story of the ‘Snow Leopards’, as the club is popularly known. The story has redefined the 'Real’ Kashmir, with football as a catalyst for change. The result since the announcement has been unexpected, while on-field the team scaled unprecedented heights finishing third in their first appearance in the I-League, off-the-field it has led to unreal and unexpected outcomes as the message of positivity spread and made a REAL change.